On Italy’s Lazio coast, a 16th-century fortress welcomes cruisers to Civitavecchia, Rome’s main port. This stunning Mediterranean village is 50 miles northwest of the capital city. Rome’s influence on art, intellect, politics and religion helped shape the Western world, and much from its storied past still can be seen today. Can’t-miss tour destinations include Vatican City’s Sistine Chapel, featuring frescoes painted by Michelangelo; the Roman Forum ruins, home to impressive temples from the ancient metropolis; and the Colosseum, built in A.D. 80 as an amphitheater for gladiator battles and war games. As you stroll cobblestone streets with a slice of authentic pizza or a cone of creamy gelato, make sure to pose for a photo at the Spanish Steps and toss a coin into the Trevi Fountain to ensure your return to the Eternal City. Culinary tours venture to vineyards and groves for wine sips and olive oil dips. 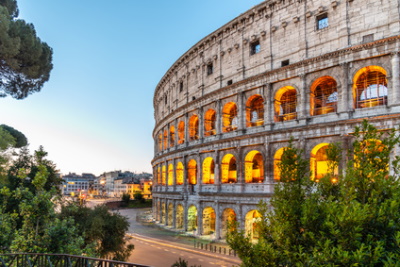 The Port of Civitavecchia is located approximately 31 miles from Rome's International Airports. Travel time between the airport and the pier is approximately 50 minutes.

Taxi fare is approximately 160 EUR. Rates are subject to change.

From Fiumicino International Airport (also known as Leonardo Da Vinci Airport) – Take the Autostada E80/A 12 – Roma-Civitavecchia. Exit at Civitavecchia Sud. Follow the signs to the “Sardinia Ferries.” Entrance personnel will provide further details. Once inside the port, signage throughout will direct guests to their assigned terminal.