Greek mythology contends that Mykonos is the rock that Heracles hurled to defeat the Giants. The island, part of the Cyclades archipelago, is known for its nightlife and slew of white-sand beaches, including Elia and Kalafatis, which are perfect for swimming and sunbathing. Steady breezes provide optimal conditions for activities such as surfing and parasailing. Revisit the 19th century at Lena’s House, an annex of the Folklore Museum, and marvel at the Mediterranean views outside Paraportiani Church. Once used to grind wheat and generate energy, the town’s famous windmills now make for great photo ops, particularly when shot from Alefkandra. This district, dubbed “Little Venice” because of its colorful houses perched along the sea, is home to trendy bars and art galleries. Boats are available to transport you to the archeological site of Delos, believed to be the birthplace of deities Apollo and Artemis. 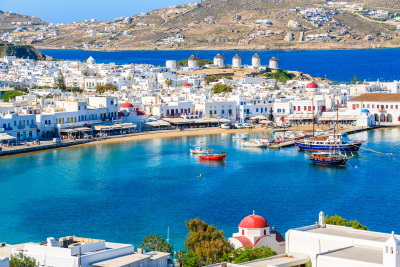